For this weeks reading response I chose to focus on the city of Teotihuacan.  I visited the city a few years ago which I feel gives me a unique perspective.  The pictures I took while I was there.

Above is a map of the city.  The main street, avenue of the dead, runs north to south.  The avenue actually runs 15 degrees east of north, so that it “aligned with the sacred mountain, Cerro Gordo.” Ching, 226.  The major east west axis, Rio San Juan, also was off center by about 16 degrees, which has to do with astronomical reasons.

I think it is very interesting how ordered this city layout is.  It reminds me very much of cities laid out by the Romans.  At this main intersection in Teotihuacan, the common buildings are located, for the common man.  To the north are the sacred pyramids.  Another aspect that I find interesting is that the Larger pyramid of the sun is not the focal point on the main avenue, rather it is on a side axis.

The above image was taken from the pyramid of the moon looking south down the Avenue of the Dead.  The pyramid of the sun is on the left and mimics the mountains behind it.  Smaller stacked pyramids create a grouping around a central platform where rituals took place.

Here is a view looking towards the pyramid of the sun from the ground, adjacent to the central platform.  It is easier to see the massiveness of the grouped pyramids and how they contribute to the monumental feel of the space.  It is very overwhelming being on the platform. 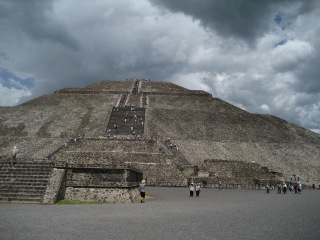 This is the Pyramid of the Sun.  Lots of stacking going on here.  Even more monumental and imposing.  The base of this pyramid is almost the same size as the great pyramid in Giza.

This is the first set of steps ascending the pyramid of the sun.  They don’t look to bad to climb.  however; the rise is almost double our standard stair rise and the tread depth is quite narrow as well.  So climbing sideways is almost necessary.  When you climb this section you see the sky straight above you.  You feel a sense of accomplishment once you near the top.  Then you feel defeat as you realize that you have barely climbed 1/4 of the pyramid.

The city was initially built by the Myans around rituals.  We have seen this use of ritual used in almost every city that we have examined thus far in class.  The use of order, in the layout of the city, as well as the idea that there was some form of a social/political system reminds me of Rome.  Aligning the main roads and pyramids astrologically reminds me of Stonehenge.  I’m also reminded of the Pyramids of Egypt in the way that the larger pyramids are surrounded by smaller pyramids and mastabas.  There are many ideas that come together here to create a sense of power, scale, and order.